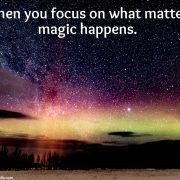 When we drop what doesn’t matter and align ourselves with what does, we can achieve even more than we’d hope for, however big or small that hope might be.

My family is no stranger to competition.  While some people have a White Elephant exchange at Christmas, we have a White Elephant contest, with the winner being the first person whose gift is stolen twice.  We actually keep track.  This shouldn’t surprise anyone who grew up with my brothers and me.  We used to sit at the kitchen table as kids reading the back of our respective cereal boxes and competing for whose breakfast had the most nutrients – without even knowing what they were.  All that mattered was who had the highest numbers, sugar included.  Raisin Bran was no match for Captain Crunch or Lucky Charms so I always lost.

Needless to say, as an adult I brought a little baggage to the White Elephant contest.  In fact, as long as I beat my brothers, I was happy even if I lost the overall competition.  Or rather I would have been happy if I had ever experienced that.  The truth is I always lose, despite selecting gifts over the last 15 years that I honestly think will win.  The oversized margarita glass filled with Reese’s Pieces?  Okay, that was a dud, but that’s when we had a $10 limit – now we’re up to $25.  What about the Black and Decker coffee maker?  Or the Hamilton Beach crock pot?  Or the super plush king size blanket from Costco that easily would have cost $75 somewhere else?  No takers.  Apparently everyone already had those things.

Which leads me to the quote at the top.  This year I decided to change my strategy.  Instead of trying to win, I thought about what really mattered to me.  It took a while to shake off the dreams of vindication, especially my fantasy of having the best gift ever in the history of Higgins White Elephantness, including seeing the lucky family member discretely concealing it so that others might forget about it.  (That actually happens every year.  It doesn’t work.  In fact, it just makes the gift more tantalizing when someone hides it behind their chair.)

But once I dropped all of that and truly focused on what would bring me genuine joy, I realized that what I really wanted was to just make one person’s Christmas a little nicer, to give them something they weren’t expecting that absolutely delighted them.  It wouldn’t matter what anyone else thought – as long as I could positively impact one person I’d be thrilled.  With that in mind, I made my way to Costco and the gift practically jumped into my cart.  Two gifts actually.  A set of eight 26 ounce lead-free crystal wine glasses and a really nice bottle of red wine that had earned an 85 from the Wine Spectator.

With my new goal, I could hardly wait for our White Elephant contest.  I wasn’t disappointed. My nephew’s girlfriend selected my gift after it had already been stolen once.  I didn’t care about that, even though it was the first time one of my gifts had ever been stolen. What mattered to me was the smile on her face.  To make it even more special, it was her first Christmas with the family.  I watched as she walked back to her seat with my gifts in her arms and then leaned over and whispered something into my nephew’s ear.  His smile just added to my joy.

It’s really true – when we drop what doesn’t matter and align ourselves with what does, we can achieve even more than we’d hope for, however big or small that hope might be. 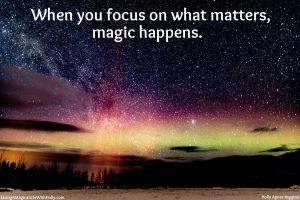 The Magic Of Believing