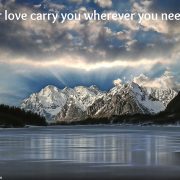 If you can’t find inspiration to make a change you know you need to make, allow the love you have for another to be your motivation.

Years ago I had an addiction to food.  I’d eat normally for four or five days and then binge, mostly on sugar: a pound of M&Ms, two quarts of ice cream, a dozen donuts – whatever it took to numb me emotionally.  I always felt incredibly sick and hung over the next day and hated myself.  But I couldn’t stop.  This went on for years.  At a certain point I finally got into counseling and began addressing the pain underneath my addiction.  But the binging continued.

Counseling led to developing a personal spirituality that eventually healed most of my pain.  But I was still addicted to food, despite being happier and more at peace than I’d ever been in my life.  I had learned how to mitigate the damage so that I wasn’t binging as often or on as much food, but I was still addicted.  My life continued to revolve around binging – how long could I hold out this time?  How much could I mitigate the damage?  It was like walking on a fence, trying so hard not to fall but feeling more and more anxious with each step.  Finally the tension would reach a point where I’d step off.  Just making the decision, just knowing that I was going to binge that night, brought relief.  But the next day I’d be back on the fence, determined to hold out longer this time, knowing on some level I wouldn’t.

I can’t explain why the conversation was different this time.  Over the years I’d called my mom countless times to break my commitment to get together because I was too sick from binging the night before.  But this time when she said it was okay – she always said it was okay – I could hear the pain in her voice.  I don’t know why I’d never heard it before.  Maybe I was too consumed with my own suffering to sense hers.

After we hung up I was racked with sorrow.  Not pity, but actual sorrow.  For the first time it wasn’t about me – it was about her and the pain I’d caused.  Pain I could never take away no matter how much I changed.  But I could stop inflicting more.  Something shifted and I felt a resolve I’d never felt before.

The first three weeks were the hardest.  Every cell in my body screamed for sugar.  I had headaches. I couldn’t sleep. My anxiety intensified more than it had in years, but I REFUSED to give in.  I was determined to stay on that fence no matter what it took.  After three weeks the fence got a little wider.  After six months it disappeared altogether.  I was walking on the ground for the first time in over two decades.

That was 17 years ago.  I never broke another commitment with my mom.  Her love for me and my love for her saved me.

It doesn’t matter what the change is – ending an addiction, creating more balance in your life, learning how to forgive yourself, stopping a bad habit, going for a new dream or challenge – if you can’t do it for yourself, allow the love you have for another to be your inspiration.  If you’re willing, let that love be the source of your resolve and go back to the well as many times as it takes until you’ve made the change.  You deserve it. 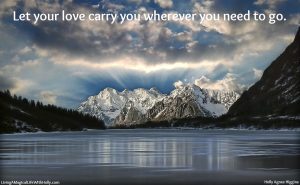 The Love That You Are Is Unstoppable

The Magic Of Believing
Scroll to top