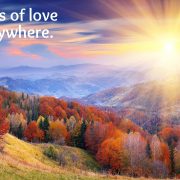 Feeling deserving is a gift waiting to be accepted.

This week I want to share a very personal story.  In October I went to a spirituality workshop in Los Angeles.  One morning before the event started I took a short walk and found a Christmas card on the sidewalk.  It was dirty and looked like it had been there for a very long time.  I was curious, especially since it was only October, so I picked it up and opened it.  Inside was a hand written message from a CEO to a female customer saying, “We appreciate your business and look forward to serving you in the future!”  I can’t explain it, but it felt like a whisper to me from the Divine so I carried it back to the hotel and put it in my room.

That afternoon while on a break I went for another walk.  I was busy thinking about what I’d just experienced in the workshop when I saw an advertisement on the ground directly in front of me.  From a distance I could see a rectangular piece of paper with two words in large font, all caps: “JUST YOU.”  This made me curious again so I walked a few more steps and picked it up.  In a much smaller font were the words, “Our goal isn’t to serve billions”.

I immediately thought of the Christmas card and felt chills go up my spine.  What were the odds of finding two messages on the same day about serving?  And the intimacy of the second one, “Our goal isn’t to serve billions. JUST YOU.”  I stood there staring at the rectangular piece of paper.  Tears filled my eyes.  I don’t know how much time passed, but at some point my watch started beeping, meaning that the break was over so I carefully folded the paper, put it in my pocket and rushed back to the hotel.

I looked at it on and off again throughout the workshop.  When I got home I put it on my kitchen counter, along with the Christmas card.  Despite these whispers, I was having a hard time with the idea that the Divine wanted to serve me.  I knew I was loved, but serving me?  That was unfathomable.  I was here to serve the Divine, not the other way around.

Fast forward to December.  Last week I was meditating and the idea of deserving came into my mind.  As I sat with it, I realized that I honestly didn’t know what it felt like to deserve.  Although I’d learned decades ago that everyone deserves the very best that life has to offer just because they exist, it was still an idea to me rather than an experience.  In fact, the only times I’d really felt like I deserved was when I’d worked super hard to earn something – then I deserved it.  Or, less admirably, when I’d struggled and suffered a lot – then I deserved it (although a wiser part of me knew that that was more an issue of feeling entitled rather than feeling deserving).

I continued to sit in meditation with this idea of deserving, wondering what it would feel like without any earning or entitlement – to deserve just because I exist, just because that’s the nature of Divine Love.  After a while a question came to me, “What does the word deserving mean to you?”  Then I saw in my mind’s eye “de-serving”, like they were two separate words.  I exited the meditation and quickly googled the meaning of “de”.  There were many definitions, but what stood out for me was “of” and “out of”.   I thought to myself, “Of serving.  Out of serving.”  Then for some reason I looked to my left and saw the rectangular ad sitting on my counter from six weeks earlier: “Our goal isn’t to serve billions. JUST YOU.”

Everything became very, very still.  I felt a hush all around me.  Then ever so gently I heard inside my heart, “Holly, the Divine wants to serve you, to be of service to you.  When you can accept that, you’ll know what it feels like to deserve.”

All I could do was weep. 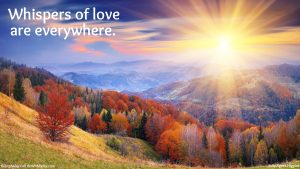 Your Pain Isn’t Your Fault

Your Joy Is A Gift To The World
Scroll to top