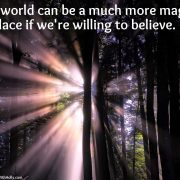 New friendships are waiting to be received.

I was raised Catholic and as a child strongly believed in guardian angels.  I lost that faith in my teenage years, but rediscovered again in my late twenties.  As I’ve grown older, my faith has only gotten stronger, but now I think of angels as unseen friends and they aren’t limited to guarding.  Yet even with the power of my belief, I’ve been stunned by the ways they have intervened in my life – and not just when I needed help, but for the fun of it, as friends.

Years ago I sat down to meditate one Christmas morning before getting together with my extended family.  I like to relate to most of my unseen friends in a female or male form rather than just sensing them as light or energy because for me, it makes it easier to connect.  That morning an unseen friend who I know as my Higher Self appeared with a brightly colored gift wrapped box in her hands.  I was very surprised.  She handed the box to me and excitedly said to open it so I untied the ribbon and carefully lifted the lid.  Inside was the most beautiful sweater I’d even seen.  It was a rich, gorgeous pink and unbelievably soft.  I immediately tried it on and of course it fit perfectly.  Still surprised but grateful, I thanked my Higher Self and exited the meditation.

A few hours later I was with extended family and we were getting ready to exchange presents.  Our tradition is for the adults to draw names so that everyone is responsible for buying one nice gift.  That year my sister in-law Helen drew my name.  As I opened her gift my jaw literally dropped – it was the exact same sweater my Higher Self had just given me.  I was absolutely stunned.  I sat there starring at the sweater for the longest time, obviously looking very strange because Helen said in an anxious voice, “Uh, you can take it back.  I have the receipt.”  I looked at her, trying really hard not to cry, and said, “No, no. I love it.  It’s perfect.”

I managed to keep myself together until I got home later that day and then I burst into tears.  I was so overcome with emotion.  I was used to my Higher Self helping me, giving my guidance or supporting me as I dealt with an issue, but this wasn’t anything I needed.  It was just a gift, from one friend to another.

I never saw her or my other unseen friends the same after that.  I hadn’t realized it, but my childhood belief around angels was still tainting my perspective.  Yes, they were there to protect and guide me, and I’d experienced a lot of that over the years.  But more, they wanted to be friends – friends who enjoyed giving gifts just for the fun of it. 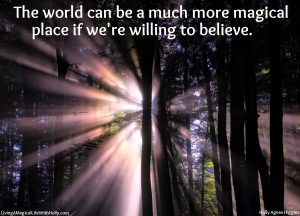 Allowing Love For Another To Be Your Inspiration

Aligning Ourselves With What Matters
Scroll to top