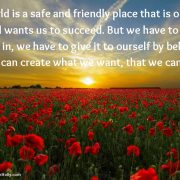 When we honestly believe we can create what we want, it makes it much easier to let go of what isn’t working in our life.

What we feed our attention to grows.  When we don’t think we can create what we want, we will often keep trying to fix something that in our heart we know we need to release.  For example, let’s say we’re in a romantic relationship that isn’t working despite our best efforts to change it.  Rather than letting this relationship go and learning whatever we need to learn to create a better one, we often keep struggling and suffering, trying to force something that is never going to happen because deep down we don’t believe we can do any better.

Or perhaps we’re in a dead end job without any possibility of promotion in our company. Rather than getting our resume together and taking whatever steps we need to take to secure a better job, we often keep trying to force the issue, continuing to feel frustrated and perhaps even unappreciated because again, deep down we don’t believe we can do any better.

Not believing we can do any better – not believing we can create what we want – results in continuously feeding our attention to what isn’t working, which makes it grow, along with whatever suffering and misery we’re experiencing with it.  But we can change this at any time, no matter how long it’s been going on or how entrenched or powerless we’ve felt.  Bottom line, we are holding a faulty belief, a faulty belief that is driving our action or inaction. A faulty belief that says that we can’t do any better, that we can’t create what we want.

But beliefs are just opinions held with conviction. They’re not truths with a capital “t” and often they aren’t even ours – they were given to us by the authority figures we had growing up.  This means that we can change what we believe at any time.  It’s in our hands.  It’s our choice and only our choice what we choose to believe now.  So how do we change what we believe?  One very powerful method:

We truly can create what we want.  We truly can do better.  And we’ve already done it many times – everyone has.  We just need to believe that when it comes to the things that aren’t working in our life.  To stop feeding them our attention and instead focus on what we want to create, to focus on how we want to do better.  And we deserve it – we deserve the very best that life has to offer just because we breathe. 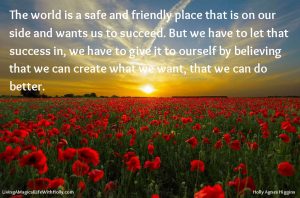 We Are the Utter Authority in Our Life

You Are Breathtakingly Beautiful
Scroll to top