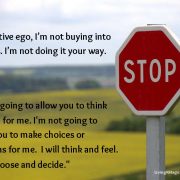 If your negative ego had its way, you would never heal or grow or change.

But that’s the problem – people give their power away to their negative egos all the time and don’t even know it. They believe this negative part of themselves when it spews its lies. They don’t recognize this enemy within and therefore they can’t say no. When people say, “I am my own worst enemy” they’re actually talking about their negative egos. They are not their own worst enemy, their negative ego is and if they could learn to recognize this part of self rather than identifying with it, they could say no. That’s all it takes. You just say no. You don’t battle, you don’t struggle, you don’t fight. You are in charge of all of yourself, including your negative ego, and you just say no. 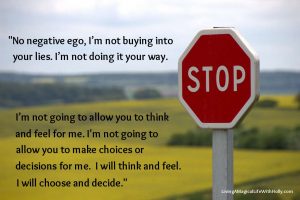 You Are 100% Worthy The Moment You Are Born

Love Is The Ultimate Safety, Not Control
Scroll to top